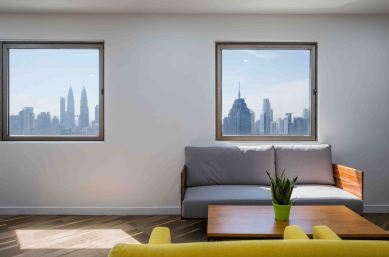 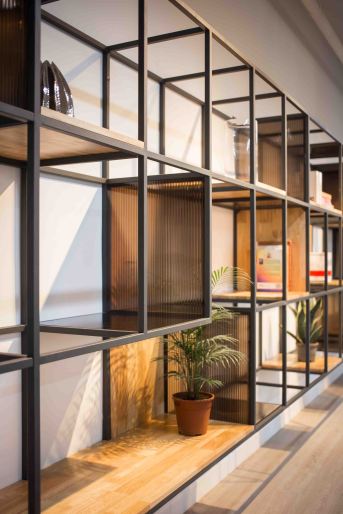 This fit-out exercise creates a new 10,000 square foot workspace for Construction Research Institute Malaysia (CREAM) in an existing tower block in the city of Kuala Lumpur. The starting point of design had been to articulate workspaces around existing windows to maximize daylight. They are arranged along the periphery of the existing central core, and adjusted according to wall opening positions, allowing most to have views out to the city.
Open-plan layouts are popular in city offices, but researchers found sitting in one rather distracting and prefer more private workspaces. As such, the new fitout consists of private rooms for managers and head researchers, while assistants sit mainly in semi-private enclosures.
Workspace partitions are crafted from industrial polycarbonate sheets and acoustic fabric panels framed with laminated rubberwood. Rubberwood are obtained from rubber trees and is considered an eco-friendlier source of timber than other hardwood types as they are faster to grow and are often leftovers from plantations after their ‘trees have ceased producing rubber sap’.
The same materiality is used throughout the space to create a cohesive feeling. In the entrance lobby, rubberwood is used to fashion thin slats that line the walls and ceiling. The use of natural materials here is essential to creating a feeling of ease and warmth that the client seeks. Meeting rooms, discussion rooms and library are directly accessible from the lobby. Privacy to these rooms are afforded by framed translucent polycarbonate partitions.
The research office was designed and built with a very tight budget, which necessitates the use of ‘cheaper’ materials like polycarbonate panels, laminated rubberwood and painted mild steel. Steps were taken to minimise their use and waste by utilising them in their properties of rawness and assembling structures with dry fixings, so they can be dismantled and reused in the future.